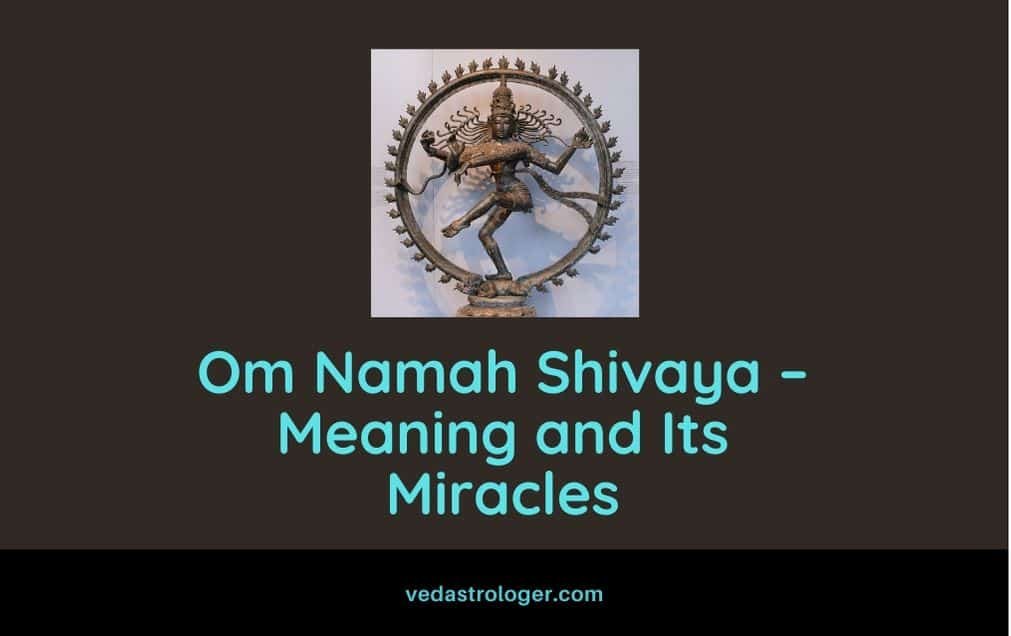 There are eleven stotras or parts in each chapter. Both sections are listed in Namakam &  Chamakam.

ॐ Namah Shivaya Mantra is present in the eighth stotra of the Namakam chapter without “ॐ” as ‘Namah Shivaya Ch Shivatarai Ch’.

This mantra is also present in Rudrashtadhyayi which is part of the Shukla Yajurveda. This mantra is present in the forty-first verse of the fifth chapter of Rudradashthyayi (from which it says Namakam) as ‘Namah Shivaya Ch Shivatarai Ch’.

What is the Om Namah Shivaya meaning?

The meaning of om Namah shiva mantra is to I bow to shiva or I salute shiva. Om Namah Shivaye is the basic mantra that helps to purify your soul and bring meditativeness into those unable to meditate properly.

Namah Shivaya means “Namaskar to Lord Shiva” or “Salutations to that mangalkari!” is.

Among the Siddha Shaivite and Shaiva Siddhanta traditions which are part of the Shaiva Sampradaya, Namah Shivaya is believed to reflect the five elements of Lord Shiva’s Pancha Tattva realization and universal unity on his five elements:

“M” represents the sound of water

The “Ya” sound represents the sky

Its total meaning is “universal consciousness is one”.

These five letters in the Shaiva Siddhanta tradition also represent the following:

“No” represents the secretive power of God (the Tirodhan Shakti)

“Na” represents the first chakra drops, this found in the spine between the anus and the genitals.

“Ma” represents the second chakra, this is found in the below navel.

“Si” represents the third chakra, this is found in the solar plexus.

“va” represents the fourth chakra, this is located into the center of the chest.

“ya” represents the fifth chakra, this chakra is located in the center of the throat.

This mantra has also available in Rudrashtadhyayi who is the section of the Shukla Yajurveda.

The entire Shri Shiva Panchakshara Stotra is dedicated to the meaning of this mantra.

Tirumantiram, scripture recorded in the Tamil language, describes the significance of this mantra.

While repeating this mantra verbally or mentally, one should focus on the infinite and omnipresent presence of Lord Shiva in the mind. This mantra repeated 108 times on the Rudraksha Mala. This is called chanting yoga.

Mantra beginning is often a part of temple rituals such as prayer, praise, chanting, havan, meditation. The Guru speaks the mantra in the right ear of the disciple and also explains the method of repeating when and how.

Why You Should Chant-Om Namah Shivaya?

Lord Shiva is the God of gods and very powerful. Shiva also knows as tridev or devadidev. There is no end and beginning of lord shiva. There are many om Namah Shivaya benefits by chanting shiva mantra you can get over all the fear and stress.

As you know that the human life of these days is very busy and stressful. A mental disturbance can destroy all inner peace.

In this situation, you get tensed to overcome it. Om namah shivaya helps to overcome these problems. There are many other good reasons to chanting om Namah shivay:

Get back the calmness

Life is no bed of roses these are many problems that can come in your life. That can destroy your inner peace completely. This is the only mantra that can make your life peaceful and joyful.

Did you know that what is the reason behind chanting “om Namah Shivaya”? this is the powerful mantra and you don’t need to do yoga or meditation. By chanting this mantra you mind automatically gets stable and focused.

This mantra consists of five syllables: “NA”, “MA”, “SI”, “VA”, “YA”. According to tho the Hindu granthas or books these syllables represent the five elements earth, water, fire, sky, wind. When anyone starts chanting this mantra he admits that shiva is everywhere.