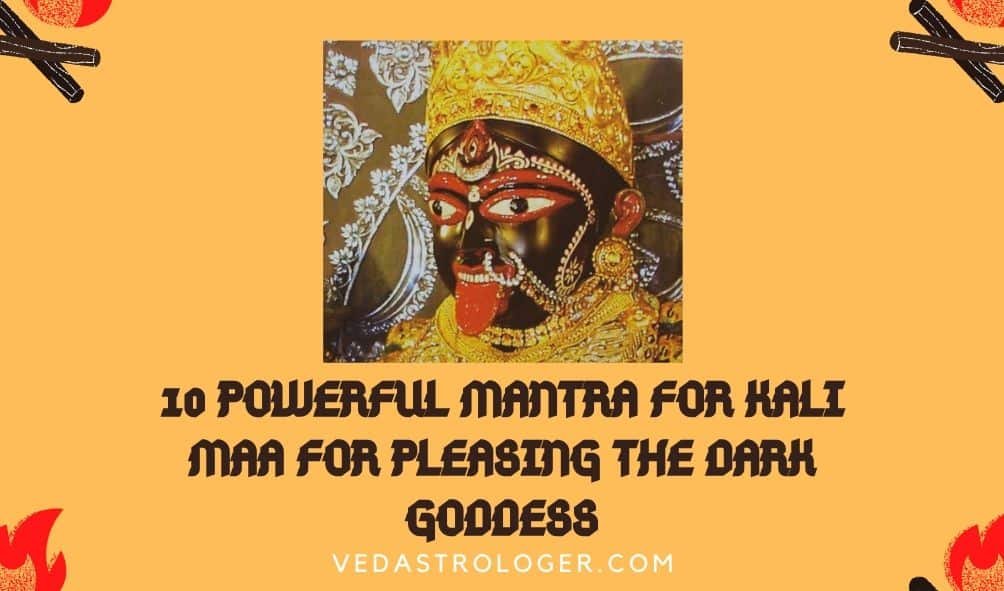 According to the tantrikas, there is some mantra for kali maa by which all the crises of a person’s life are eliminated immediately.

The form of Maa Kalika is more captivating and delightful for devotees than it is frightening. Sanyasi and Tantrik are usually worshipping mother Kali.

It believed that the mother transcends the Kali period and gives salvation.

Being an Adyashakti, she fulfils every wish devotee of kali. According to the Tantrik and astrologers, there are some mantras of Maa Kali that an ordinary person can use in their everyday life to overcome their distress.

Who is kali mata?

Kali Mata is one of the powerful devas or hindu gods. Black of Mahakal. ‘Kali’ means time and time. Kaal, which destroyer everyone in itself. Goddess of terrible darkness and cremation. According to the Vedas’ time spirit, the soul at the same time. This goddess is also known as kalika.

Maa Kalika originated to protect religion and to destroy sinners-demons.

Great Goddess Kali has been called Mahamaya of Mata Jagdamba. The mother was born as Sati and Parvati. In the form of Sati, She showed a tableau to Shiva of his ten births through first of the 10 Mahavidyas.

Maa Kalika is the most awakened goddess in Hinduism. >> Name: Mata Kalika Arms: Trishul and Talwar

A form of Durga: Mata Kalika one of the 10 Mahavidyas

Maa Kalika is worshiped especially in Bengal and Assam. The word ‘Kali’ refers to Kaal and black color. ‘Kaal’ means time. Maa Kali is considered to be one of the 10 Mahavidyas of Goddess Durga.

Special: Once he goes to Kalika’s court, his name and address are recorded. If there is a donation here, then punishment also.

If blessed, curse too. If you come to the court of Kalika whatever promise you make, you must fulfill it. Whatever you promise to do instead of the vow, you must do it otherwise Kalika Mata may be angry.

Understand that who is honest, truthful and sure of the word, his work will also be done immediately.

Learn, the story of the birth of Maa Kali

According to scriptures, Maa Bhagwati took the form of a vicious form known as Maa Kali to end the evil. All their fears of human beings are removed by worshiping them.

Name Kali is a formidable form of Mother Durga and it is known that the mother had taken this form to kill the wicked. There are many stories behind this form of mother in scriptures and their lecture is also found there.

Let’s know the story behind this terrible form of kali:

Once an asura named Daruk pleased Brahma. With the boon given by him, he started giving grief to the gods and Brahmins like the fire of holocaust.

After that, he stopped all the religious rituals and start setting his kingdom in heaven. All the gods reached the abode of Brahma and Vishnu. Brahma ji told that this evil will be killed only by a woman.

Then all the gods including Brahma, Vishnu went to fight against the evil Daaruk in a female form. But that monster was very strong, he defeated all the devtas and drove them away.

All the gods including Brahma, Vishnu reached the Kailash mountain, the abode of Lord Shiva and told them about the monster Daruk. Lord Shiva, listening to her, see at Maa Parvati and said, hey Kalyani I pray for destroy the evil daruk and save the world.

Hearing this, Mother Parvati smiled and a part of her entered Lord Shiva. Whom God could not see Indra etc. and Brahma from mother Maya of Bhagwati, he saw Goddess sitting near Shiva.

That part of Bhagwati Mata entered the body of Lord Shiva and start to take its shape from the poison that was located his throat. Due to the effect of poison, he turned into a black character.

Lord Shiva felt that part inside and opened his third eye. He had a black mother of black appearance in a fierce form.

Mother Kali had a third eye and a lunar line. The throat had a sign of Karla poison and she was adorned with trident and various types of jewelry and clothes in her hand. Seeing the fierce and huge form of Mother Kali, Gods and Siddhas started fleeing.

With the mere hum of Maa Kali, all the Asura army including Daruk was burnt to ashes. With the flame of the mother’s anger, the whole world started burning. Shiva sees all the world burning with her anger and they start changing the form of a child.

After that lord shiva goes to the crematorium and starts crying in front of kali maa. When mother Kali saw that child Shirupi, she became fascinated by that form.

With a heartfelt gesture, he embraced Shiva from his heart and started feeding him with her breasts. Lord Shiva also cared for his anger along with milk. His anger caused eight idols to be called Kshetrapal.

She became unconscious due to Shivji drinking the wrath of mother Kali. In order to bring Goddess into consciousness, Shivji performed Shiva Tandava. When mother Kali came to her senses, when she saw Shiva dancing, she also started dancing, due to which she was also called Yogini.

R stands for she is auspicious,

I stand for she bestows booms, and

M means that she gives freedom.

Benefit: This Mantra For Kali Maa helps to protect from all the negative forces or energies.

Meaning of mantra: This Mantra For Kali Maa is used for the representation of the kali Mata.

Benefit: This mantra of kali mata is simple and changes the devotee to pure consciousness.

Benefit: Mahakali mantra is believed to bring blessing and primal energy from the divine mother. Chant her mantra to obtaining god grace.

Benefit: This Kali mantra gives you strength and giving protection from all types of problems. It does not matter how complex it is.

Meaning: O dark goddess, my kali maa is full of joy. In Thy delirious joy Thou dancest, clap the hands together! Through art, the Mover of all that moves in thy world.’

Kali Mantra for worship in English

Meaning: This powerful kali Mantra consist of three seeds, Krim, hum and hrim, and the name ‘Dakshina kalike’ and ‘swaha’, which means offering.

Benefit: Devotees chant the mantra of kali maa, the preserver of Earth, who saves us from all the ignorance and the fear of death.

Meaning: ‘Om Great dark goddess mother Kali, the One and only one, who resides in the Ocean of Life and in the Cremation Grounds that dissolve the world. We focus our energies on you, may you grant us boons and blessings.’

Benefit: Through the chant of this mantra, the aspirant’s mind becomes divinely changed and passes from the gross state of worldly affairs into Kali’s subtle light of pure alertness.

This is also called as karpuradi stotram.

Meaning: One of the devas, she is dark, with flowing hair and four-armed.Dakshina Kalika divine, adorned with a garland of heads. Her lotus hands on the left, a severed head and a sword She bestows sanctuary and with the right hand, they give blessings.

Benefit: Chanting this mantra denotes the dissolving of attachments, anger, lust, and other binding emotions, feelings, and ideas.

These are the easy chants to please the Black Goddess kali maa. Manifestations of the great goddess mantra can help makeing you more stronger.

This kaali mantra can be chanted by only a few people use this mantra due to its purgative nature.

Most Powerful Mahamrityunjay Mantra Meaning And Its Benefits

When to start Kaali Sadhana?

he Mantra For Kali Maa is chanting during the Ashtami of Navratri and if you want the higher effect of this kali mantra powerful then you have to chant these mantras in Gupt Navratri.

Which direction should be used in Kali chanting?

You have to do your face East or Northside while doing the chant. There are no Counts of kali maa Mantra. but if you chant these mantras for 125000 within the 41 days then it’s good for you.

What should I offer to Kali Maa?

Kali Maa accepts everything that you offer to her with your pure heart. You can do pooja with ritual dressing of kali Mata as Adhi Shakti Kali and you don’t need to sacrifice any animals.

How do I invoke Kali Maa?

There are 5 ways to invoke Kali Maa:-
1. Meditation of kali maa
2. Self Reflection
3. Asana
4. Offer your negative beliefs, evil thoughts to kali maa, and bow down to her and believe for her to destroy.

When should I chant Kali mantra?

You should chant the Kali Gayatri mantra and the best time to chant is: Amavasya tithi and morning time around 4-5 am or before sunrise, it will brings stability to life and more beneficial for you.