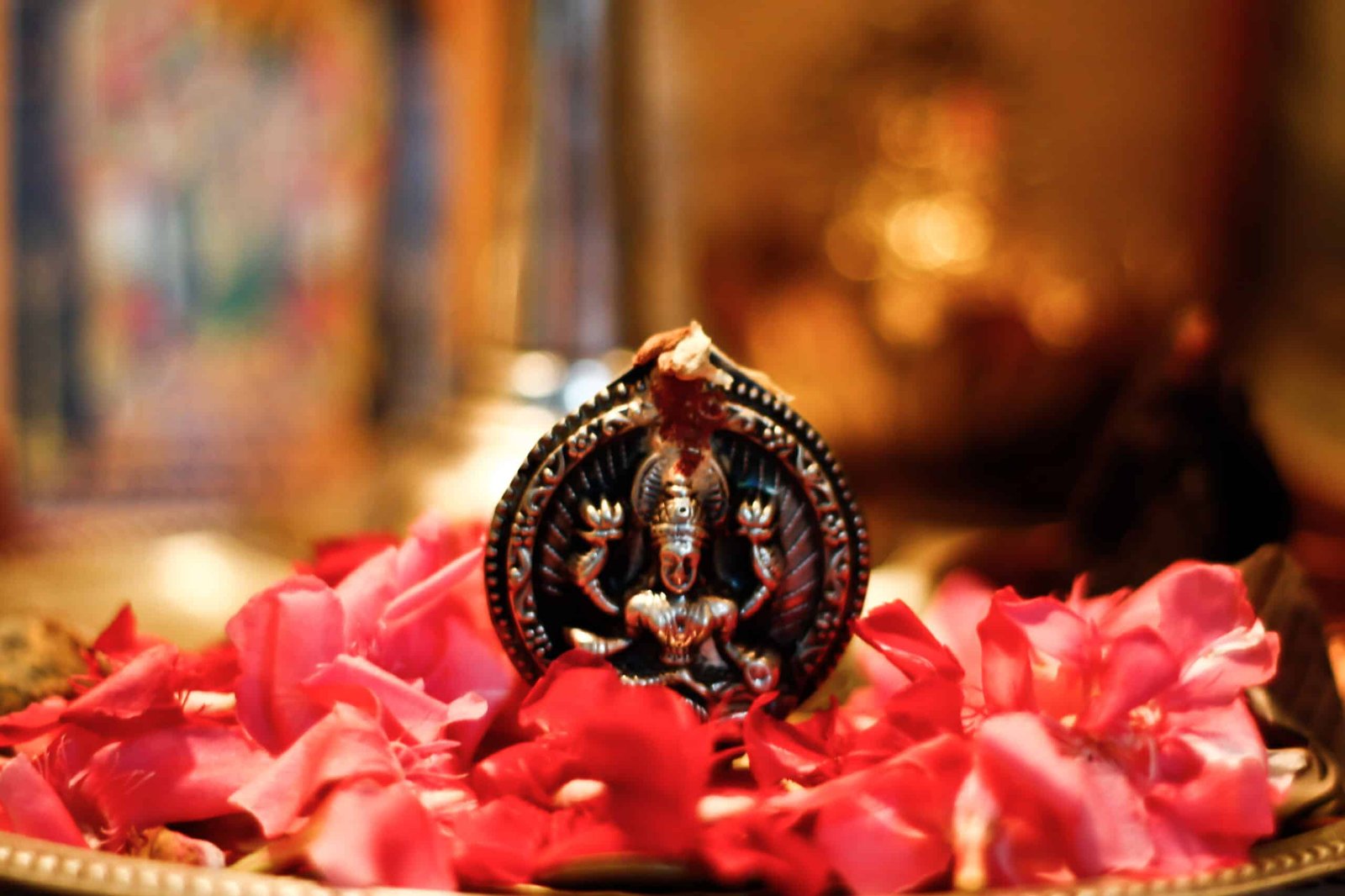 Laxmi Mantra is dedicated to God Laxmi mata. In Hinduism, Mantras are considered to possess spiritual efficiency, and these mantras have their significance in every Hindu rites. Mata Laxmi is the symbol of wealth, prosperity, abundance and luxury.

Due to this, the mantra for Laxmi is used to attract wealth and prosperity in one’s life.

It is believed that by chanting Mahalaxmi Mantra, one can get rid of all kind of financial losses and all health-related issues.

Who is Mata Laxmi?

Mata Lakshmi is the Goddess leading to one’s target, or lakshya, and has been described in the Rigveda’s Sri Sukta.

She is both Vishnu ‘s wife and divine force, one of the significant Hindu and Supreme Beings supernatural entities in the Vaishnava tradition.

She portrays the physical world of the earthly realm as the mother goddess, called Prithvi Mata; she is also identified as Bhudevi and Sridevi by her twin personalities, and in another form as Nila Devi.

Throughout Indian art, Lakshmi is represented as an elegantly dressed, prosperity-showering golden-coloured woman with an owl as her mount, indicating the importance of economic activity in the preservation of life, her ability to travel, work and prevail in confounding darkness.

She typically stands or sits on a lotus pedestal like a yogin, holding a lotus in her hand, symbolizing wealth, self-knowledge, and holy enlightenment.

Her symbolism shows her with four hands, representing the four facets of human, which are significant to Hindu culture: dharma, kāma, artha, and moksha.

What is mahalaxmi mantra meaning?

Mahalaxmi is the consort of Lord Mahavishnu, who is the protector of all universe. Lakshmi Mata is the goddess of wealth, prosperity, luxury, and abundance support of the created universe. She is very important for live happy, successful and peaceful life.

Here is the Word Meaning of Lakshmi Mantra in Hindi

Hreem – Purification (clear) of the heart

How Mata Laxmi came into existence?

Laxmi Mata is one of the tri-shakti, and she is the wife and divine energy of Lord Vishnu.

But do you have any idea, how goddess Laxmi came into existence and married Lord Visnu? There is a mesmerizing story about the birth of Laxmi Mata.

Indra, the king of the heaven (swarglok) was once wondering on his beautiful white elephant Airavata in the proud of being the master of all the prosperity and the king of swarglok.

There was a sage called Durwasa who is known to be the most resentful sage of that time. Sage Durwasa was travelling the world, and in his journey, he found a garland made of the most fragrant flowers.

When he saw Indra in front of him, he offered that garland to Indra as a gift but Indra did not get off from his elephant to accept that gift, so sage durwasa put that garland on the forehead the Airavata but Airavata couldn’t bear the fragrance of that garland.

He started shaking his head due to which the garland fell. It made Sage Durwasa very angry, and he cursed Indra to be shree-heen which means all the prosperity of swarglok for which he has pride would disappear.

Due to the curse of Sage Durwasa, all the things which indicates prosperity started to be disappeared one by one including Airavata, money, precious jewellery and all other estimable things which belonged to the devtas.

All the devtas became splendor less (shree-heen). King Indra realized his mistake and started begging for forgiveness from Sage Durwasa, but all gone in vain because curse and boon cannot be taken back.

Indra seeks for the help of Lord Vishnu, and he recited him the whole story.

Lord Vishnu was not pleased with the shameful act of Indra but looking at the condition of Indra and all other devtas he suggested a way to bring back all the prosperity which he has lost by the churning of the sea.

Devtas started churning the sea with the Asuras with the condition that they will distribute the resultant equally among themselves. By churning fourteen ratnas emerged from the sea.

golden coins in one hand and other hand was in Abhayamudra (gesture of fearlessness). The other two hands were carrying beautiful lotus flowers.

Her beauty was so magnificent that the devatas and asuras were not even able to gaze her in one sight. That four-handed goddess was Mata Laxmi.

With the emergence of Goddess Laxmi, everything in the universe started glorifying and thus Lord Brahma called her the goddess of prosperity.

Now the question was who will get Goddess Laxmi? Devtas and Asuras started fighting for the Goddess.

Watching the situation going uncontrollable, goddess Laxmi said that no one has a right over any women as she has her right to choose an eligible husband for her.

There are many mantra for Laxmi puja, which people chant to get prosperity in their lives. These Laxmi Ji Mantra are so powerful that they can change the life of a beggar and make him a king.

To please Laxmi Mata, one should chant Mahalaxmi mantra with dedication and piece of mind. Here are some Laxmi mantra in Hindi and in English with their meaning and benefits:

Meaning: Praying to the Goddess to get rid of all evil forces and lavish with all a prosperous and a better future.

Benefit: Mahalakshmi Mantra is narrated for getting the blessings from Goddess Mahalakshmi for the gain of health, success and property.

Meaning: “By mediating the greatest Goddess, the wife of Lord Vishnu, gives a great intelligence also provides with prosperity.”

Benefit: By chanting the  Lakshmi Mata Gayatri Mantra one can be blessed with prosperity and success life.

The Beej Mantra of Goddess Lakshmi is only श्रीं (Shreem), which is combined with other words to form various Mantras.

Benefit: All positive energy and vibrations are produced by repetitive chanting of these powerful vidya Lakshmi Mantras.

Meaning: Mahalakshmi destroys poverty in all three worlds and blesses with prosperity and wealth.

Meaning: Mahalakshmi makes my house full of wealth and prosperity and remove all worries.

Meaning: One who removes all obstacles, gives wealth, splendor and sons. Who fulfils all kinds of desires of man, there is no doubt in this.

Benefits: regular chanting of this Mahalaxmi mantra keeps away all the evils from one’s life and provide peace of mind.

The chanting of these Laxmi Mata mantras will remove all the obstacles and bring a perfect blend of health, wealth and prosperity. These mantras also attract positive energy which brings peace of mind.