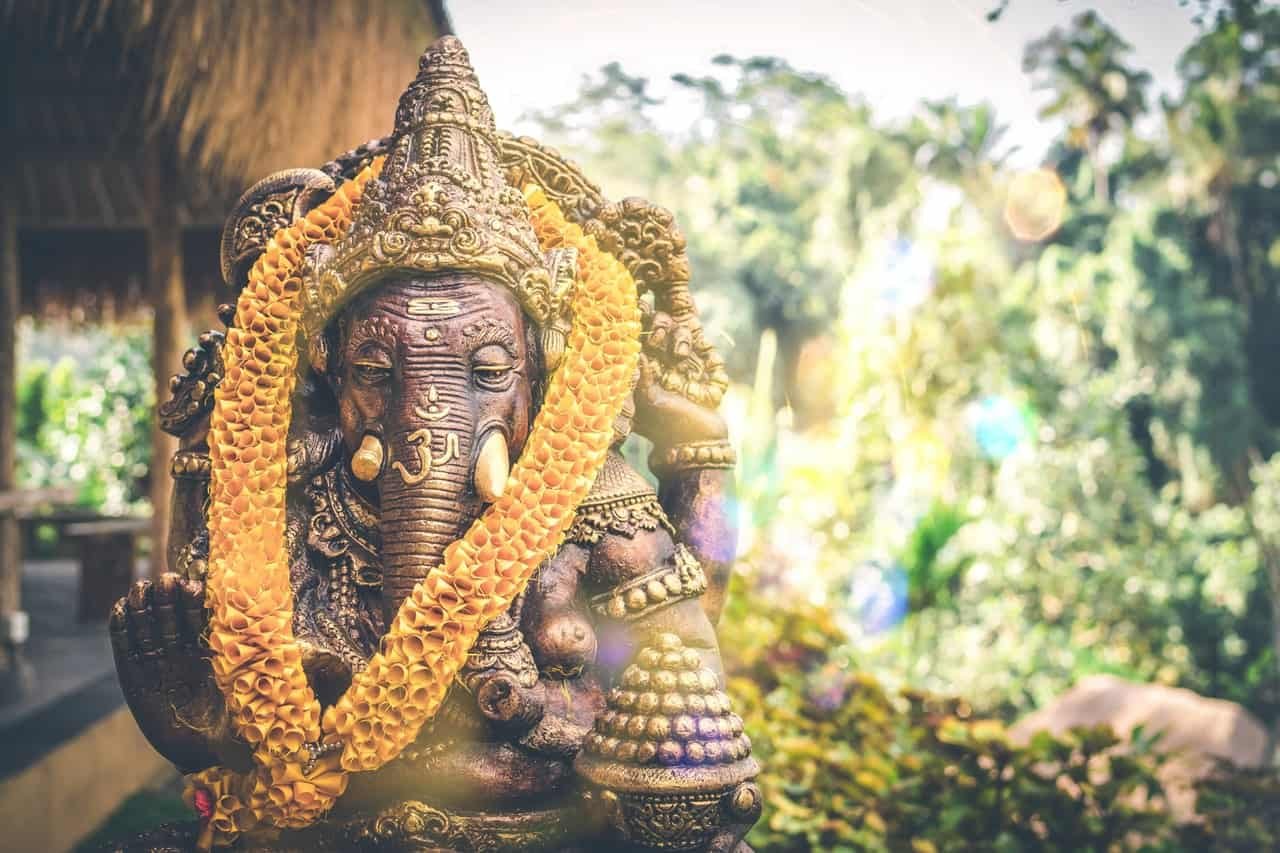 In Hinduism, the oldest and most revered deities are Lord Ganesha. Almost the entire east has a connection to this powerhouse.

This may be because he stands for removing all the obstacles that life throws at you.

In Hindu tradition, Lord Ganesha is worshipped before starting any function. The Ganesha mantra is full of power and energy. It gives positive results if recited with genuine devotion.

In Hinduism, there is a fixed day to worship a specific deity. So, the day to worship Lord Ganesha is on Tuesday. On the same day, Lord Hanuman is also being worshipped.

Having 108 different names, Vighnaharta is one among them which means remover of all obstacles.

About Lord Ganesha and ganapati mantra

Son of Lord Shiva and Goddess Parvati, he is the God of knowledge. Connecting scientifically, the universe is made up of atoms and different energies.

There is a supreme law governing all the chaos between a diverse group of entities. So the governing power of all these groups and energies is Lord Ganesha.

Religiously, in Hindu dharma, Lord Ganesha symbolizes intelligence and represents Mahat which is the highest form of Prakriti in the process of creation.

He is having a human body with an elephant head with only one tusk. According to lore, the number of limbs varies.

Normally, he is depicted as having four arms carrying a noose and goad. There are many stories behind having one tusk. The famous one was when he denied maharishi Parshurama to enter mount kailsha because his parents were sleeping.

They both engaged in battle, Parashurama threw his ax at Ganesha’s head and he lost his tusk. As the ax was of Lord Shiva, he took it without any resistance.

He has a big round belly, maybe because he holds a bowl of dumplings!

Both are born from different wives of Lord Ganesha. Goddess Riddhi is the mother of Shubh and Labh is the son of Goddess Siddhi.

The birthday of Lord Ganesha, also known as Ganesha Jayanti, is celebrated every year in January or February.

In August or September, Ganesha Chaturthi or Vinayak Chaturthi is being celebrated.

Lord Ganesha has the head of an elephant which symbolizes the soul, which is the ultimate reality of humanity.

The human body of him signifies Maya, the trappings of earthly existence.

There are different Ganpati mantras, which help remove different obstacles from your life.

Paired with the proper pranayama (rhythmic breathing) with sincere devotion, these mantras will yield good results.

In performing any process or chanting mantras you should know what all benefits you will get after it gets completed. So here are 12 benefits of chanting Ganesh mantras.

There are different mantras for different problems. Like there are powerful ganesh mantra for money, mantras to remove obstacles in love, overcoming any trial, to remove hurdles, or Ganesha mantras for removing obstacles from your life.

I bow to the omnipresent one.

This mantra is taken from Ganapati Upanishad. Before starting any new journey- like a new job or business, a new course in school, etc. the main aim of reciting this mantra is to remove all the obstacles and award you with success.

Greetings to the one having an elephant face. Tribute to the one to whom ganas also serve. I venerate the one who consumes jambhu and kapitha fruits. O son of Uma, destroyer of sorrow, I pray to you. I bow down Vighneshwara at your feet, which are like lotus.

Om, praise to the one having a tusk and one curved trunk, I bow down in front of you to get the blessing by your grace for a wonderful life.

Greetings to the one having one curved trunk, and a huge body, to the one, emits the glow of millions of sun, and to the one who is the remover of all the obstacles.

Keep your blessings upon me before all my efforts and struggles always and forever.

Om( The sound of the universe), I bow to the one having one tusk.

Lord Ganesha has one broken tusk, through which he broke the duality and wanted you to have a one-pointed mind. The benefits of chanting this mantra is, it will fill your mind with oneness for a single-minded devotion.

Om, I bow down to you Lambodaraya.

Lambodaraya is one of the other names of Lord Ganesha, which meach means having a large belly with organic or inorganic creation and wisdom of cosmos.

This means the whole universe is within an individual. Om is the sound that comprises the entire universe and makes the person feels he is the universe.

Om, I bow down to the one who towers above all the hindrance.

It is believed that Lord Ganesha can remove all the obstacles from your life. All the impediments and blocked energies are free if you recite this mantra. You can chant this mantra anytime but Ganesha Chaturthi is the most suitable day.

The universe sound, Om, I bow down to the leader of all the Ganas.

Ganadhyakshaya is another name of Lord Ganesha, which means the leader of Gana. This mantra is to heal a group of people. Just keep all the people of a group in your mind and chant this mantra.

Om, I bow to the one having huge fanning ears that only receives what is important.

You already know, Lord Ganesha has an elephant face having huge ears. Those ears only listen to what is important and neglect all the other unimportant things.

If you are chanting this mantra, you are aligning 7 chakras and all the 72,000 nadis, to any Loka. You can hear your ancestors, angels, and the voice of prophets or God. This mantra will help you to develop this kind of inner ear.

We are offering our prayer in front of Lord Ganesha for his blessings and good fortune for our immediate and coming life-times. We bow down in front of whom, who protect us from happiness and health and provide peace.

The meaning of Siddhi Vinayak is “the God of achievement and enlightenment”.

The English translation of this mantra is “ O, the Lord of wisdom and happiness, you only can make all the efforts and everything possible; you can remove all the obstacles, and you have delighted every being on this universe. You are the Lord for everyone, amen.”

The meaning of shakti is power and Vinayak means ‘the supreme master’.

For financial success and prosperity, this shaktivinayak mantra is being enchanted. It brings good health and good luck.

This mantra is also known as Ganesha Beej mantra or the Bija mantra. Beej means seed, that is the source of everything.

This is one of the most concise and powerful mantras of Lord Ganesha. It starts with Om which gives rise to energy, purity, positivity, and the presence of Lord Ganesha himself in one’s life.

Another name of Lord Ganesha is “Rinn Harta” which means “The giver of wealth”. In Hindi, the meaning of “Rinn” or “Rinnam” is ‘debt’ and “harta” is ‘remover’.

This mantra is enchanted for wealth and prosperity in life. People pray to Lord Ganesha to keep poverty and debt away from their lives and bring abundance.

In the golden age, the name of Lord Ganesha is Vinayak which means ‘something under control’. ‘ The Lord of resolving problems’ is the other meaning of Vinayak.

Anyone who chants this mantra will have a golden age. He will be the boss both in-office and at home.

This could be anything a new job, a new relationship, a business deal, or even any new personal project.

There are few guidelines to recite Ganesha mantra. Let us see them.

Every human is different and has their own beliefs. But mostly it happens, human seeks some support from an unknown source and feels immense power if it is granted. In Hinduism, there are more than 33 Crore deities to be worshipped. Each one has its importance and significance in an individual’s life.

Like Goddess Laxmi is for wealth and prosperity, Goddess Saraswati is for knowledge, etc, Lord Ganesha is worshipped to remove all the obstacles from one’s life.

So you can enchant Ganesh puja mantra for all your wishes!!!

10 Powerful Mantra For Kali Maa For Pleasing The Dark Goddess

Most Powerful Mahamrityunjay Mantra Meaning And Its Benefits

Which is the oldest Ganesh temple in Tamilnadu?

Karpaka Vinayakar Temple is the oldest Ganesh temple in Tamilnadu. This temple was made in the 8th century located in pilliayarpatti in tiruppathur taluk. This rock-cut cave shrine temple is fully dedicated to Lord Ganesha nad, also known as Pillaiyarpatti Pillaiyar Temple.

2021 Magh Ganesh Chauth Puja is on which date

Sakat Chauth Vrat 2021 Date: 31/January/2021
On this date, Sakat Chauth Vrat, mothers keep mothers for the long life of their children. Ganesha Chaturthi Vrat is very important. Although two Ganesh Chaturthi comes every month, Chaturthi is considered very special in the month of Magha. This fast is on 31 January in the year 2021