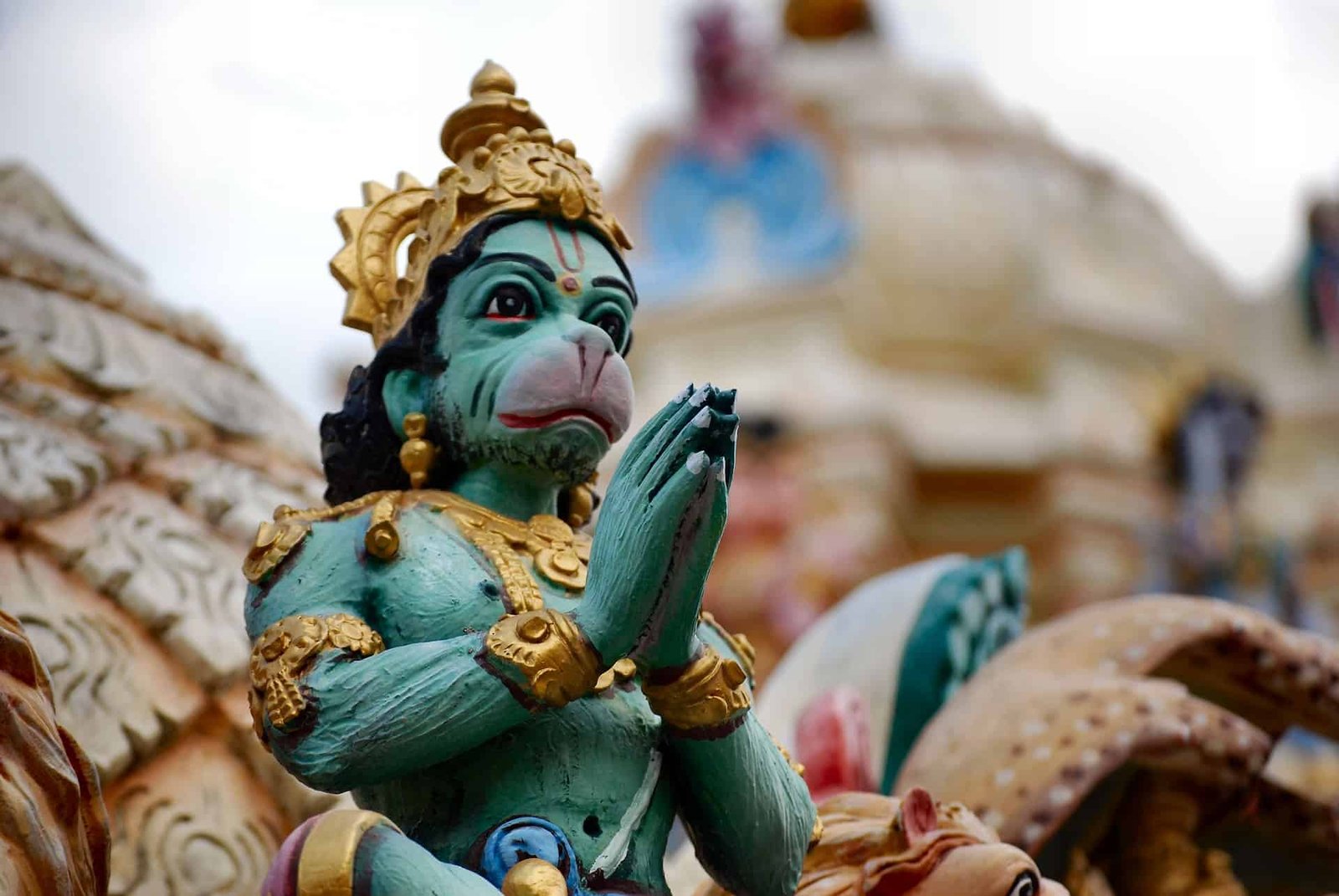 Hanuman mantra is a very powerful mantra in Hindu dharma. Hanuman (also known in Sanskrit: Hanuman, Anjaneya, and Maruti) is one of the most popular concepts of devotion to God (devotion to God in Hinduism) and the most crucial figure in the Indian epic Ramayana.

According to some thoughts, he is considered the most powerful and intelligent of the 11 Rudravatara of Lord Shiva. According to Ramayana, he is very dear to Janaki.

On this earth, among the seven mystics who have the boon of immortality, there are also Bajrangbali. Lord Hanuman incarnated to help Lord Rama.

There are many tales of Hanuman’s valor. The way he made Sugriva’s friendship with Rama and then killed the demons with the monkeys’ help is very famous.

He is known as Bajrangbali because his body was like a thunderbolt. He is known as Pawan Putra. Vayu or Pawan (the God of wind) played an essential role in raising Hanuman.

Story Why Hanuman Tries To Eat Sun As A Fruit

One day after his birth, his mother left him in the ashram to bring fruits. When the baby Hanuman was hungry, he considered the rising Sun as fruit and started flying in the sky to catch it. Pawan also went very fast to help them

On the other hand, Lord Surya did not allow him to burn with his glory, considering him an innocent child. At the time when Hanuman rushed to catch the Sun, Rahu wanted to eclipse the Sun.

When Hanumanji touched Rahu in the upper part of the Sun, he was afraid and ran away. He went to Indra and complained, “Devaraj! You gave me Surya and Chandra as a means to calm my apps. Today on Amavasya day, when I went to suffocate Surya, I saw that another Rahu was going to catch Surya.

On hearing this thing of Rahu, Indra got nervous and took her along and walked towards the Sun. Seeing Rahu, Hanumanji left the Sun and pounced on Rahu.

When Rahu called Indra For protection, he hit Hanumanji with Vajrayudh, causing him to fall on a mountain, and his chin broken.

Seeing this condition of Hanuman, Vayudev got angry. He stopped his pace at that moment. Due to this, no creature in the world could breathe, and all started to suffer in agony.

Then all the suras, asuras, yakshas, ​​eunuchs, etc. went to Brahma’s shelter. Brahma went to Vayudev with them all. He was sitting sadly with a tangled Hanuman in his lap.

When Brahma Ji resurrected him, Vayudev transmitted the agony of all beings by sending their motion.

Then Brahma said that no weapon could harm its part.Indra said that its body would be stiffer than thunderbolt.

Suryadev told that they would give him a century of his glory and blessed him to penetrate the scriptures. Varun said that this child will always be safe with my loop and water.

Indra’s thunderbolt broke hanuman’s chin (Hanu in Sanskrit). That is why he gave the name of Hanuman.

According to the Hindu epic Ramayana, Hanuman Ji is depicted as a very manly man with a monkey face. His body is very muscular and powerful.

Janeu hangs on his shoulder. Hanuman Ji is shown with an exposed body wearing only a nappy. He is shown wearing a golden crown on the forehead and a gold affection on the body. He has a long tail like a monkey. His primary weapon is considered mace.

Why Lord Hanuman Mantras important in our life?

Ghosts, devils, and spirits never trouble those people to chant the powerful mantra of Hanuman. If someone does lord hanuman mantra jap daily with energy and prana.

Many Gods and Goddesses are worshiped on Tuesday, but Hanuman Ji is worshiped, especially today. Before which time also ends.

Hanuman Ji is considered an incarnation of Rudra i.e., Shiva. It is said that by chanting the mantras of Hanumanji on Tuesday, your Mangal Dosh also ends.

If you have made all efforts in your life to make Mangal Mangal and nothing is going right, let us know from about the 13 mantras of Hanuman Ji, by chanting which will make all your ambiguous work Mars Will go

Mool mantra is highly recommended for those who are facing problems and challenging situations in their life.

By chanting this mantra regularly, we can get physical strength, stamina, and positive thinking.

If you want pleased lord hanuman easily and fast, then hanuman beej mantra helps please hanuman and get blessings.

If you face evil spirits problems, any diseases, or other distractions, chant this mantra 21000 times, you will get results soon.

Meaning: – The abode of Atul Bal, the one with a fine body like a mountain of gold, destroys the monstrous forest, at the forefront of the knowledge, the wealth of all virtues, the monkeys.

By chanting this Mantra / Mantra 10000 times, any of your stalled work is completed soon. With this, if you are caught in a lawsuit, then it also wins.

8.Hanuman Mantra for the prevention of ghosts:

By chanting this mantra for 1000 times, this mantra is proved. But if you chant this mantra at the time of the solar or lunar eclipse, it is shown by just chanting once.

After perfecting the mantra, chant this mantra to the patient in whom the ghost and ghost have come and dust it with peacock feathers.

And along with this, by chanting the mantra / Hanuman Mantra, water is also given to the patient.

By doing this, the patient gets rid of the disease by getting calm from ghosts’ hindrance, etc.

If someone has nightmares. Often, you are afraid of dreams, or you are fearful of some unknown thing even during the day, then chant this mantra 11 times before going to bed and sleep with three claps.

After chanting this mantra / Mantra, after chanting a quarter of a million, the person who has to control his feet, read this mantra 27 times and now touch this part with his limb as that person is subjected to the seeker. It will be done.

11. Mantra for progress in business: –

After reading this mantra on the black box and putting it in the shop, the stalled business starts running.

This Mantra / Mantra of Hanuman Ji can be chanted regularly at the time of worship. To prove this mantra, there is a law of chanting 1.25 lakh mantras and twelve and a half thousand sacrifices.

But you do not need to prove the mantra, and you can chant this mantra for your welfare. Chant 3 garlands daily to please Hanuman Ji and to fulfill wishes.

Meaning: – He who is faster than the speed of mind. Who is more potent than Vayu, who has won a complete victory over all the senses, who is at the forefront of the intellect, the son of Vayu.

Who is prominent among the apes (Hanuman Mantra). I go to the shelter of that devotee (Lord Hanuman) of Lord Shri Ram Chandra.

In the time of Kali Yuga, the worship of Hanuman Ji is considered to give quick results. Worshipping Hanuman by mantra mentally connects you to Hanuman Ji.

Whatever mantra you chant Hanuman Ji, keeping in mind its meaning, chant it slowly or mentally with full devotion. Never chant the mantra aloud.

By chanting Hanuman Mantra by the student, his mind becomes intense, and the mind remains calm, evil thoughts do not come in mind. The student should chant Hanuman Ji’s Deducation mantra.

In any way, worshiping Hanuman Ji will give full fruits, you just have to keep true to your feelings towards Hanuman Ji and renounce the deeds of worldly evil (detestable acts). Hanuman Ji fulfills all your wishes – Thank you.